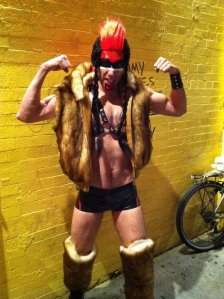 Hide ya kids, hide ya wife, cause there’s a dirty kinky savage up in here.

HALLOWEEN!  I love it!  And this year I combined my Native American heritage with my love of gear.  The result: PAGFI (Post-Apocolyptic Glam Fetish Indian).  The costume genuinely started with a vanilla Native American theme…but when my puppy friend David gave me a pair of rubber shorts, I knew I could make it into something greater.  An old fur coat from a thrift store that served as a top AND bottom (cut off sleeves became part of the boots) with my typical leather accessories and a flashy display of face paint/wig and BAM!  I’m a kinky savage ready to run around the streets of New York going woowoowoo!

I got lots of attention from folks on the street (which I loved) and noticed more women than gay men casually/blatently eyeing my crotch (again, loving it).  Black girls seemed to enjoy my costume the most with a lot of them shouting “work it, girl!” when i walked by.    Most people knew I was a kinky Indian…but I did have one dude from Australia think I was Ke$ha…and another guy ask if I was Cher.

Saturday night I ended up at the Eagle for their costume contest (which I hadn’t intended on entering until I got so much support from randoms on the street) and joined up with some of my social crew for the festivities.  There were some pretty awesome costumes there that night and I felt my “shocking” native outfit just blended in with the rest of the bar (seriously, out on the street/in the subway I got looks and gasps…but inside the Eagle I’m just another geared up boy).

Brian Kent, Mr. Eagle 2004, hosted the contest and served up his usual entertaining bitchy banter (I do not want to get on his bad side).  I could tell he was somewhat impressed with my ensamble when I walked across the stage, but unfortunately I did not make the final 5 cut…UNTIL one of the other dudes vanished and Brian looked out into the audience and called me back up.  YES…dismissed, and then chosen again.  And then promptly dismissed one more time when the audience was called on to applaud their favorite costume.  Honestly the Top3 costumes were very impressive and I salute their efforts.

But even though I did not place in the contest, I did make it to the stage.  The very stage I will be standing on NEXT October for the Mr. Eagle 2012 contest…most likely with Brian Kent hosting.

Halloween was a fun night and I loved being a kinky Indian.  The only set back was I felt self conscious about kissing anyone because I didn’t want to smear my face paint all over another guy’s face/neck/upper thigh.  Oh well…guess this week at CODE I’ll wear the rubber briefs sans Indian garb.  WOOWOO!

This entry was posted in Personal. Bookmark the permalink.