The Deceptive Damage of Progress 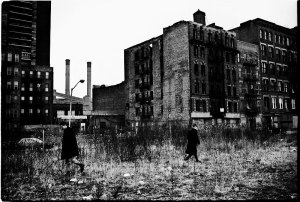 Once when walking with a friend through the increasingly sketchy streets on the way to the Eagle for his first visit there, my friend glanced around at the rundown buildings and empty lots and remarked, “It’s rather…remote over here.”

Situated a few steps from 11th Ave (bet some of you didn’t even know there was an 11th Ave!) the NYC Eagle is a little bit remote in Manhattan terms. Next door is a straight strip club and across the street is an undeveloped lot.  Public Housing is nearby as well as some warehouses.  It’s really the perfect setting for a leather bar…out of the main lights and surge of the city where one has to be at least a little bit brave to venture.

But when you stand on the roof deck of the Eagle and gaze north, your eyes are confronted with a massive, modern condo building a few block away.  Recently constructed and gradually filling up as noted by the increasing number of lights on in the units, this development stands like a mechanical tower of evil over the dirty and abandoned landscape.  It stands out of place and ominous as a sign of things to come.

Years ago, before I ever put on leather, the infamous bars of the Meatpacking District were where gay men lurked and hunted.  Back then the area was dangerous and smelled like fish and was a haven for the fetish boys.  Today, after the process of gentrification, the Meatpacking is trendy with boutiques, expensive restaurants, and high priced rents.  The fish smell is gone and it’s safe, but the edge and character are gone as well.

All over NYC this “cleaning up” process has produced less crime, more parks, and more “family-safe” environments, but it’s also pushed out some of the artists, the weirdos, the rebellious and the deviants.  In place of dive bars and dark alleys are now vacuous designer shops and posh eateries where the air of cool that once defined the streets now only serves as a surface-level memory.

And while I love that NYC is a safer, cleaner place, I have to weigh at what costs these improvements have come.  As the expanding grasp of gentrification now invades the streets close to the Eagle, I wonder how many years we have left before future local residents run the leathermen out of this last leather outpost in favor of a Whole Foods or multi-storied pet spa.  In San Fransisco their Eagle is up for sale with rumors of it turning into a remodeled straight bar (the horror!)…and while I only have a handful of memories of the SF Eagle, all of them are very good and the loss of that place makes me sad.

There’s no question that things around us are changing and as a result we are changing as a community.  Gentrification of the urban landscape it only a small element of the overall changes occurring within society that have an impact on us.  But these changes will not be the end of the community–at least not the end of the community I have come to call home.  The things that I love about Leather are things that cannot be diminished or lost because of shifting time or place or the changing of fads or interests.  The bonds of friendship, the openness of experience, and the encouragement to be the best man I can be are things that will thrive whether we’re chilling at the Eagle or in some other space on some other street.

“Whatever happens, we’ll find our place.  We’ve done it before,” a brother said to me when I asked him about his thoughts on the future.  “When the Lure closed people thought it was the end of the world, but then we moved to the Eagle.  The crowds changed some, but those who want to be here are here.”

With the fall of Troy, Aeneas flees the burning city carrying his father and holding the hand of his son--3 generations together that would later found the beginnings of Rome.

We create the space we need…the space does not create us.  I love the Eagle and think it has even more potential than some give it credit for…and while we have it as our Leather domain, I will proudly support and celebrate it.  Should the day ever come that the bar close its doors, I’ll not despair, but rather flee into the night like Aeneas of Troy, carrying his daddy and boy, to found a new kingdom of kink (high five for the elaborate Classical analogy).

Until that dramatic day, see you at CODE 😉

This entry was posted in Observations/Lessons, The Eagle. Bookmark the permalink.

1 Response to The Deceptive Damage of Progress