I Now Pronounce You, Man and Man 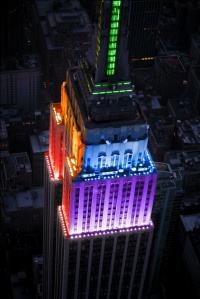 I awoke last Saturday morning to a good-natured and joking proposal of marriage from my boyfriend.  “Did we get the vote?” I mumbled as I blurred into wakefulness.  Yes, we got the vote.  Fags can marry in New York now.

GAY MARRIAGE!  WOOHOO!  Ok honestly the phrase “gay marriage” bugs me a little bit.  It’s not gay marriage…it’s marriage…it’s marriage equality.  And after years of campaigning and hoping we now finally have the recognition and support of the New York State government for our relationships.  Six states down, forty-four to go.  The tide is turning and with it I imagine a change in the way LGBT people think about themselves, their relationships, and their place in society.

Back when I was in college and on the verge of coming out, I thought that to be gay would mean to give up any hope of getting married and having a traditional family.  Admitting to myself and the world that I was a homo meant giving up so much and plunging into a life I knew nothing about and was scared to death to embrace.  Since then I’ve ventured along and found that queer life really isn’t that different and it’s been a continuously unfolding experience of discovery and growth.  There have been rough spots over the years and having to fight for equality within my personal world as well as the larger societal context  has tended to wear on my spirits a bit.

Living in a society that doesn’t validate me or my relationships has given me thick skin and taught me to turn inward for strength.  At times I’ve subtly–or forcefully–rejected societal norms and expectations and I’ve developed a “fuck you!” reflex response to the ignorant haters who sneer at me when I hold hands walking down the street or lecture me with pseudo intellectualism about morality and natural design.  I’ve come to define the quiet intimate moments with a lover as true and pure and as existing beyond society’s cruel grasp.  My oppression and rejection have formed a type of rebellious strength that sparks bravery, honesty, and passion.

And on Saturday afternoon–Pride weekend–as I walked through the city I felt something completely new–a new level of acceptance.  Maybe not fully accepted, not completely by the federal government or the religious powers in place…but today I am more of a citizen than I’ve ever been before.  And having that validation by the authority of the state has power and makes me feel less like a rebel–less under pressure and more connected to society as a whole.  I was surprised by this feeling.

So now I’m seeing friends–couples who’ve been together for years–get engaged and start prepping to be husband and husband officially.  I sense such potential for a greater acceptance of queers by the fact that we are now recognized as legitiment lovers and partners and despite the fact it’s fun to feel a bit like a rebel, it’s also way cool to feel like a “normal”.

Now I’m not saying I’m in any rush to get married…I just like the fact that civil rights have won a victory and that queers are getting a little more respect and thus a little healthier psyche as a result.  The road goes ever onward…