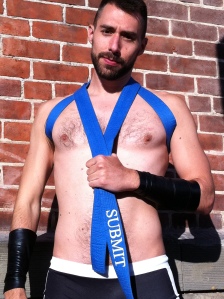 Yeah you want some? Bring it.

Somewhere along the way through all the bare chests and scruffy faces the sun had come out and brought warm light to the street fair.  The day had started rainy and chilly and I had regretfully spent the morning covered up in a hoodie.  But now it was warm enough to be shirtless and the mass of Leather folks–veterans, novices, and the curious–were out in force all along Folsom Street.

The weekend of Folsom in San Fransisco is a weekend of handsome men everywhere you turn.  The Friday and Saturday before the Sunday street fair are days devoted to cruising, laughing, kissing, flirting, boozing, and generally enjoying the community of gay men.  Happy hours seem to last all day and bartenders automatically give you 2 drinks at once; old friends/flings/lovers reunite with gropes and tongues; last minute gear shoppers fill Mr. S Leather to get a harness or test the rope and restraints on a boy they just met; dance parties rage into the night and sweaty men slide against one another under bright lights or in dim shadows.  It’s everything your Sunday school teacher warned you about, but much, MUCH friendlier and far more freeing than damning.  It’s one of my favorite weekends of the whole year.

So by the time I arrive at the street fair on Sunday afternoon after attending Donna Sachet’s annual brunch, I’m feeling the crescendo of an already great weekend building beneath my tight little fight shorts.  My outfit for the day is all NYC gear: socks by Nasty Pig, shorts and bondage belt by XGear, and arm gauntlets by Slick It Up (boots are US Army).  I feel hot, I feel comfortable, I feel active and randy.  RUFF!

By my side is my man, his predatory Dom eyes scanning the crowd for potential victims.  We swagger down the street saying hey to friends amongst the flogging and paddling demonstrations–the crowds gasping at the particularly heavy hits.  Men and women, satyrs and whores, furries and beasts all mingling together…mingling in a much tamer atmosphere than one might imagine.  For the most part it’s all a show and a casual social scene.

I stand in the warming sun and snicker at the penis-shaped treats from the food stand and try to see if I recognize any of the porn starts signing autographs.  A moment later I turn around to see two men wrestling…boots and legs bracing against an assault of arms and grasps as a crowd begins to gather around them.  My man has found his victim and together they battle before tumbling to the ground in an unforgiving pin.  I wait and give them time to work it out and after a couple crazies shout some advice and take some photos, the men stand and I’m introduced to a sexy green-eyed stud.  The sun, now beginning to set and sitting lower in the sky, shines in those green eyes revealing all their bright color.  Despite his leather chaps and hot body, I’m most drawn to his eyes.  And held tightly by my man, I’m able to take some nice shots to his chest and watch those eyes slip into thankful submission.

I realize to some this whole exchange may sound strange and perhaps violent, but in truth it’s just a fun and satisfying interaction between Leather men.  After a few more “interactions”, we say good-bye to our new friend and head towards the exit of the fair.  The day–the whole weekend–has been a success and as I walk hand-in-hand with my bf through the street barricades to the city beyond I’m already promising myself to return again next year.