Art To Teach And Remind Us (of what has come before)

Posted on February 8, 2012 by Justin Shaddix

I was an oblivious child when the AIDS epidemic swept through the gay community like a ravenous angel of death that no one yet understood.  While watching cartoons on a big boxy TV, I remember brief news reports of an evil disease that sinners got because God was mad at them.  Through my conservative Christian lens, AIDS was a part of the forbidden topic of homosexuality that sat well outside my world of understanding.  Gradually, as it happens with little kids, I grew up and learned more about myself and the world and one day I found myself free and conscious and examining a part of history that surely affects me so much, but one that I had never really had any direct knowledge about.

An entire generation of gay men has been wiped out and a horrible scar left on the collective psyche of those who remain.  Living in NYC has allowed me to meet men who lived through those harsh times and hearing their stories of lost friends and life in a society violently waking up to the emerging queer community is powerful.  Their stories also makes me realize how easy my life has been in some ways.  The history of gay men is a vibrant tale that has spent most of its time in shadows and learning about the men before me has been largely a person-by-person survey.  I’m eager for a wider perspective of where we’ve come from so as to better direct where we go from here.

Recently I went to see an art exhibit called, “HIDE/SEEK: Difference and Desire in American Portraiture“, that presents a hundred years of queer themes in art.    Below is a small selection of the work that had an impact on me…all three pieces from the late 20th century and dealing with the AIDS epidemic and the loss caused to the community.  There are powerful lessons in these works so take a moment to look and read and pause to remember.  The description below each image was taken from the exhibit writeup online.
____________________________________________ 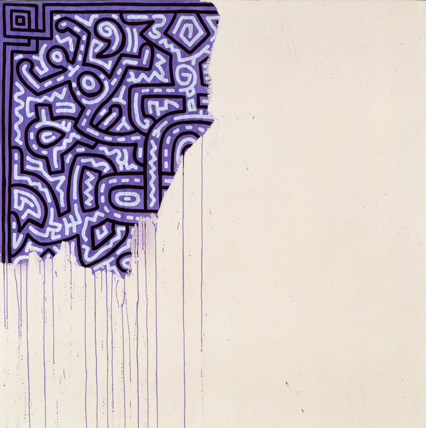 In the midst of the AIDS crisis, the poet Thom Gunn said he never thought there was a “‘gay community’ until the thing was vanishing.” In 1990, 18,447 Americans died of AIDS. The artist Keith Haring would be one of them, passing away on February 16, 1990, at the age of thirty-one. Haring had vaulted to public prominence as a graffiti artist whose comical and mysterious cartoons started appearing randomly in New York City’s subway system and led him to mainstream fame in the art world. The sketchy, skittering nature of his drawing is worked into this painting, but the structure of the unfinished work gives it a formal weight. The hanging strings of the unfinished painting suggest not just incompletion but unraveling.
________________________________________________________________

“I made this photograph of Felix a few hours after his death. He is arranged to receive visitors, and his favorite objects are gathered about him: his television remote control, his tape-recorder, and his cigarettes. Felix suffered from extreme wasting, and at the time of his death his eyes could not be closed: there was not enough flesh left on the bone. Felix and Jorge and I lived and worked together from 1969 until 1994. During that time we became one organism, one group mind, one nervous system; one set of habits, mannerisms, and preferences. We presented ourselves as a “group” called General Idea, and we pictured ourselves in doctored photographs as the ultimate artwork of our own design: we transformed our borrowed bodies into props, significations manipulated to create an image, a reality. ”
_______________________________________________________________ 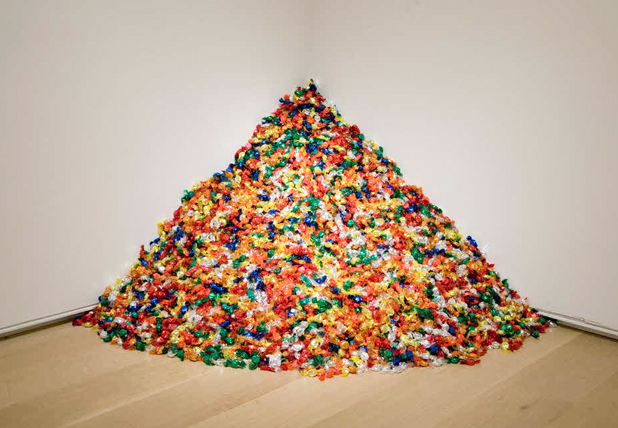 Even as a minimalist, Félix González-Torres also had a whimsical, humanistic side that showed the influence of pop art on his installations. In this “portrait” of his deceased partner, Ross Laycock, González-Torres created a spill of candies that approximated Ross’s weight (175 lbs.) when he was healthy. Viewers are invited to take away a candy until the mound gradually disappears; it is then replenished, and the cycle of life and death continues. While González-Torres wanted the viewer/participant to partake of the sweetness of his own relationship with Ross, the candy spill also works as an act of communion. More darkly, the steadily diminishing pile of cheerfully wrapped candies shows the dissolution of the gay community, as society ignored the AIDS epidemic. In the moment that the candy dissolves in the viewer’s mouth, the participant also receives a shock of recognition at his or her complicity in Ross’s demise.